Telling it how it is living as a blind man and letting children walk in his footsteps. Read Kris’s experience with Primary school children in Southampton. 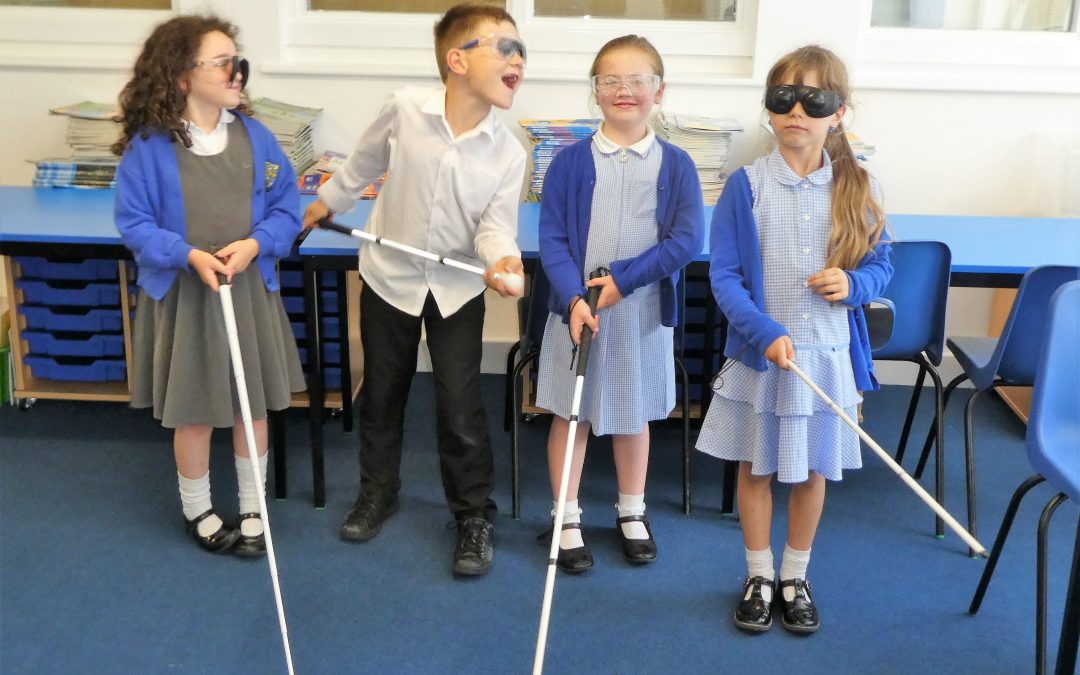 The current bi-word for inclusivity and diversity, ‘difference’ can be a rollercoaster ride at times. As a member of the impairment club it can still feel as if your invitation to the empowerment parade has somehow gotten lost in the post. When confronted by the spectacle of visual impairment – replete with white cane and tinted glasses – the well-meaning public can often be caught in the glow of social awkwardness only a blind man can conjure.  The all-too-common invisibility of the otherly-abled in both the media and wider society has led to many such a merry dance with strangers. Somehow something needs to change. Perhaps it’s difficult to teach old dogs new tricks, but their ever eager and enthusiastic pups might just begin to turn the tide.

And so it was with the hope of change that I agreed to play a small role in the Sight Awareness Workshop for Schools, set up and run by some truly inspiring folks here at Southampton Sight. Aimed at Year 2 pupils, this simple but ingenious programme seeks to educate and challenge the often reductive perceptions of sight impairment, humanizing and demystifying a section of the community most children would have seldom met. An honourable endeavour for sure and, for a middle-aged man who hadn’t set foot inside a school for some thirty-odd years, a leap into the unknown.

My role was simple enough – explain the various canes I and others use on a day-to-day basis and give a brief demonstration. But a long cane requires space to manoeuvre and a visually-impaired stranger in a strange land needs time to acclimatize, breathe, and re-caffeinate. Ably assisted by one of the team, our first task was purely one of logistics.  A few laps around a suitable spot, a quiet moment of peace, and a sip of the amber nectar later and I was ready for the main event.

Ushered in eight at a time, the children were far more accommodating, engaging and enquiring than I ever could have hoped. Each group listened intently to what I had to say, seemed genuinely fascinated by what I could achieve with a little help from my canes, and unflinchingly asked the questions adults would never dare – questions about my vision, my age, how long I’d been affected for, mischievous musings around the issue of dog mess (and what I would do if my cane was so amusingly afflicted) and talk of giants and how long their canes would need to be. Touching tales of grandmothers and their various ailments followed, and heart-rending concerns for my happiness, and whether being sight-impaired ever made me sad, or scared. A true empathy I’ve very rarely felt from the world, here manifested in the purity of youth.

But enquiring minds require constant stimulation, and it was the opportunity to take a child-sized cane out for a test drive that most enthralled them. More sheepdog than mentor, now the task became one of herding as the little schoolyard became a demolition derby of tiny bodies weaving here and there. Some braved the course eyes shut whilst others opted to keep at least one beady eye open, but all seemed elated with the exercise. The chance to walk in another’s footsteps, no matter how tentatively, was a rare treat from the everyday classroom. ‘Weird,’ ‘fun’ and ‘strange’ were the most common reactions, words that couldn’t describe my own experience of the day any better.

And with that, it was over. My first adventure back in the classroom had flown by, and the nervous excitement of earlier was replaced with a sense of accomplishment. It’s hard to know the true impact my time with the children had, or how far the experience will radiate from them. Personally I feel they came to see me no longer as ‘different’, but as a person like themselves, their parents, and their friends. Such contact can only ever be a positive, no matter the outcome. For my sake it was a joy and a privilege, one that I look forward to repeating come the new school year.

Now, does anyone have a Peppa Pig lunchbox I can borrow..?