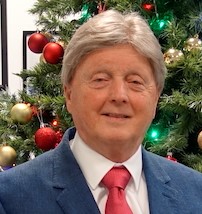 In December we said good bye to Brian Anderson, who has been the Chairman of Southampton Sight since 2015.  Brian is relocating north to be nearer his family.  During Brian’s tenure of Southampton Sight there has been a deliberate move by Brian to ensure that people with lived experience have led the way.  We have developed projects that not only ensure that people living with sight loss live positively but that we work with medical professionals and other agencies to ensure that there is a better understanding of living with sight loss.  We will miss him and wish him and Sue lots of luck in their retirement.

Howard Fair was voted in as Chair at our December Board meeting. Howard also has lived experience of sight loss.  He is a Chartered Accountant and has been an International Finance Director and a Commercial Director in the Advertising Industry before retiring, early, at the end of the last century.  Since then he has been the Finance Commissioner at Yarmouth, Isle of Wight, Harbour, a Trust Port, and then Non-executive Finance Director with Cowes Yacht Haven. In 2017 he and his wife Linda moved from Cowes to Southampton.  Howard has been a type 1 Diabetic since 1961.  He is effectively mono-sighted with restricted peripheral vision.

Howard is keen to support the Trust especially in the activities that bring awareness to fully sighted adults and children of the difficulties and challenges that partial or no sight entails.