The fun you have when traveling with passenger assistance through airports – COMMUNICATION MATTERS! 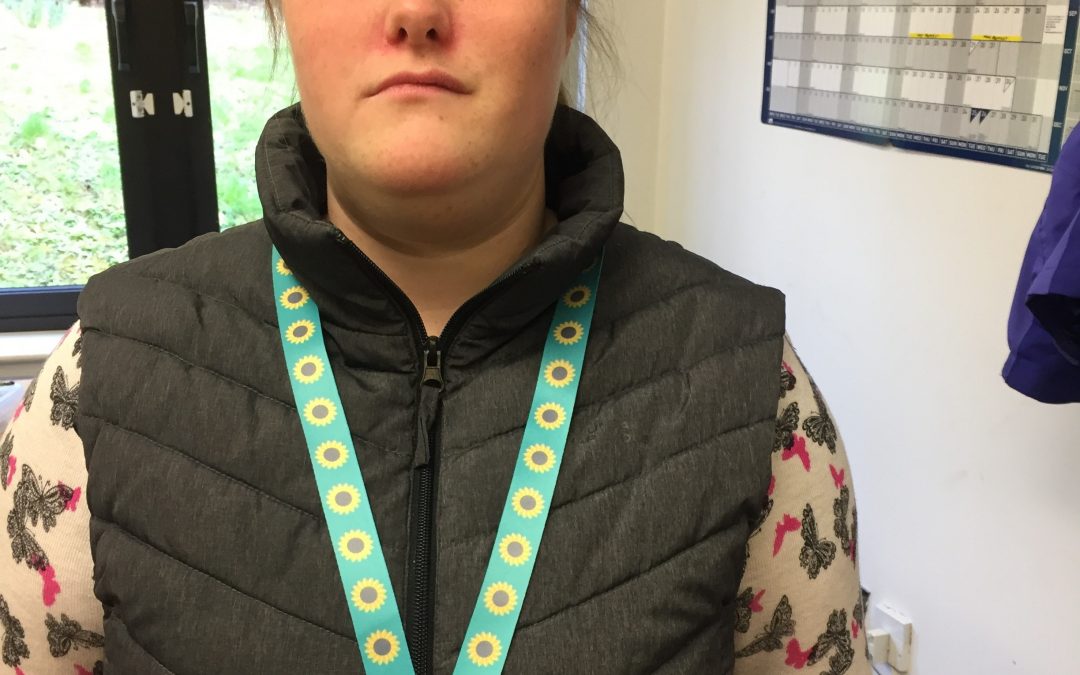 Tuesday was the first day back in the office for me after a week’s holiday.   I didn’t visit a hot sunny country and sit on a beach the entire time, not me!  I visited the republic of Ireland with my partner and our friends.

I recently wrote a blog about the Sunflower Lanyard Passenger Assistance Scheme and this is some further thoughts on traveling through an airport since being given a lanyard.

Our trip to Ireland started with a flight to Dublin, we decided to go from Bournemouth because honestly the flight was cheap.  Thank you to my partners brother for the lift to the airport and for his sighted assistance with finding the passenger assistance desk.  I was wearing my Sunflower Lanyard.

As soon as we arrive at any airport the hunt for the passenger assistance desk begins. This is never easy to find- you have even less chances of finding it if you are visually impaired.   I find this extremely frustrating.

I must say though once we found the desk, the assistance staff at Bournemouth Airport were friendly and helpful.  They gave us choices which made the whole process a much nicer experience. When we said we wanted to get a drink before boarding they assisted to the bar in departures.  When it was time to go to the gate the staff came back at the agreed time and assisted us to the waiting area and then on to the plane. We were given a choice of how we wanted to board the plane, we could walk up the steps or use the level access lift.  It was really nice being asked what we wanted to do and how we felt most comfortable.  Once on the plane we made ourselves comfortable and settled down for the flight or, so we thought!

My friend who was traveling with us, who is also blind, was asked by an air stewardess to move from his seat to another across the aisle.   We weren’t given an explanation as to why.  I have never had this happen to me or anyone else I’ve travelled with in the past.  It was difficult to have a conversation with our friend who was now on the other side of the plane and I felt sorry for the lady who was now sat next to us as we were now having to talk over her head. It did feel awkward.

After we landed at Dublin Airport we were further assisted.  This time we were told we’d be using the lift to disembark the plane. I would have preferred to use the steps however because the staff clearly explained what we were doing I didn’t mind as much- a little explanation and manners go a long way.  The friendliness continued with different staff and nothing was too much trouble.

Our holiday was a mixture of staying in a town called Newbridge and visiting Dublin.  The trip was over, now the task of getting home.

We got to the airport and again the joyful fun of looking for the assistance desk began.   We asked three staff at the airport and with help from another of  our friends eventually found our help.  We were left waiting for around 40 minutes before being taken through security and guided towards the boarding gate.  We were perfectly happy to walk all the way to the gate but instead were pointlessly put on an assistance buggy and were driven what we thought was hardly any distance at all.  Because we were one of many assists we were made to use a lift again to get on and off the plane.

When arriving in Gatwick Airport the staff were rude, abrupt and explained the bare minimum.  Once we were back on the ground we were made to board a minibus and were taken to the terminal.

It gets better, we asked a staff member to show us how to get to Gatwick’s train station.   They tried to insist that one of us be pushed in a wheelchair to the station.  We all politely refused and were shown to the train station assistant point.

Sorry this is a bit of a long one, but I wanted to show you the frustrations that I and many other travellers face every time we fly.  I’d rather travel by boat or train any day than fly.  I’d like to point out that I was wearing my sunflower lanyard the whole time I don’t think it helped at all.

We did have some good assistance experiences but far too often my friends and I encounter grumpy staff who just see you as another passenger and not an individual who may have a preference of how they might like help.