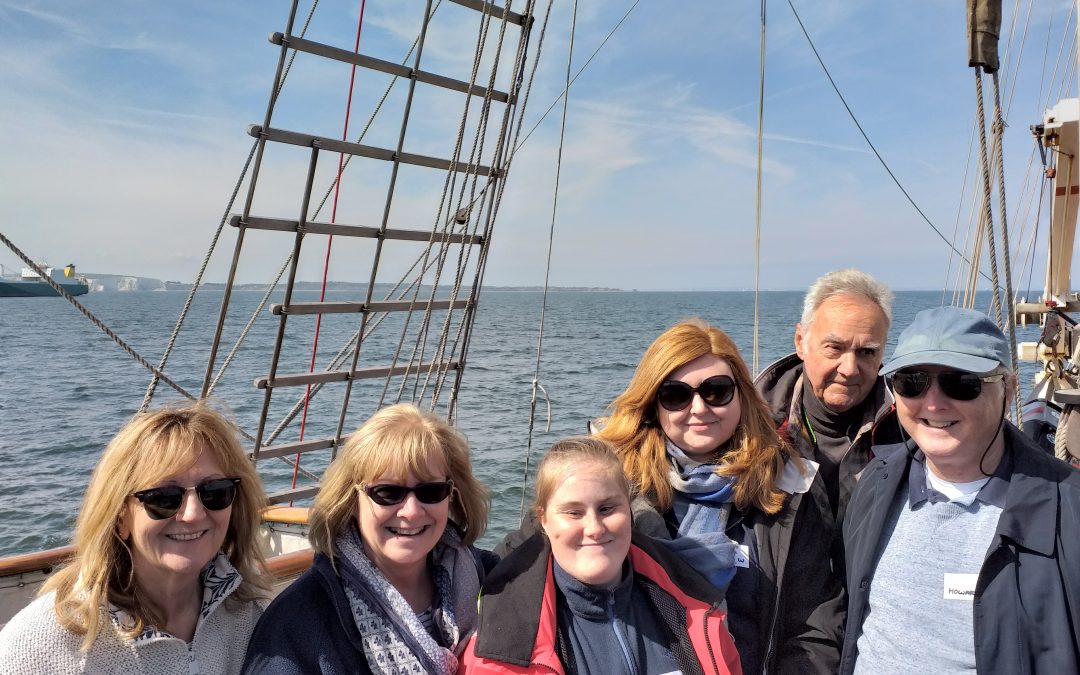 I’d like to start this blog by thanking everybody at the Jubilee Sailing Trust and Global Marine who made it possible for Southampton Sight to join Tenacious and her crew for a day sail.  Although I have sailed with the JST twice before on Lord Nelson (affectionately known as Nellie to those who have sailed on her) it was interesting to step aboard this different and larger ship.

We were fortunate enough to have 6 places on board Tenacious, 3 places for Visually Impaired Guests and 3 places for Buddies or Guides.  Howard one of our volunteers was buddied with Lorna our Operations Manager, Kevin one of our members was buddied by Sonia our Sight Loss Awareness Co-Ordinator and I was supported by Angela my Personal Assistant and colleague from Southampton Sight.

On the journey to Portsmouth, Howard, explained that he had done quite a bit of sailing in dingy and aboard yachts when he had full sight but never on a square-rigged ship, this was going to be a new experience for him and he was looking forward to seeing what the day would bring.

Lorna, Howard and I met up with Sonia, Angela and Kevin at Gunwharf Quays and all walked down to where the ship was berthed.  I knew we were approaching Tenacious because of the gasps of “Wow isn’t she beautiful” and, “She’s a big ship.”

Due to the size of the vessel and port law, we had to be escorted out of Portsmouth harbour by a pilot who knows the coastal area very well and can navigate the ship safely through the busy harbour.

Once we’d walked aboard we were welcomed with a cuppa and a bacon or sausage butty.

As soon as I was aboard two people I know from my previous sails came up to me and said hello; it was amazing to meet up with Charlie and Richard, but it did feel a little strange seeing them but being on Tenacious and not Nellie.

Once everyone was fed and watered we all went below deck for a compulsory safety briefing, this involved correctly putting on a buoyancy aid.    We were told to expect a pattern of activity:   eat, climb, eat, set sails, eat, stow sails, cup of tea and finally disembark.

Next, Sonia and I had a high time climbing the rigging J.  What we didn’t realise from the deck was how windy and cold it truly was when you go aloft, everything feels so much more magnified (you’d think I’d remember from my previous climbs).

Those of you who regularly read this blog will already know that I am a bit of a dare devil; I can assure you that even I get scared when I am climbing up the rigging of a mast.  I got up to the platform without too many problems but climbing down was a whole different story.  Because of my lack in height at one point I had to hold on with one hand and take a leap of faith (this was only about two inches but to me it felt massive) I did freeze and begin to panic.  Thank you to the Bosons mate who calmly told me where to put my hands and kept a firm grip on the top of my climbing harness.  Back on deck, the sense of elation was amazing; I know I have climbed before, but I will always enjoy the challenge, fun and even the scary bits.

I have to say that even though I enjoyed helming and climbing the mast, the best bit of the day for me was observing Kevin.  His confidence and independence grew throughout the day.  (I have spent a lot of time with Kevin, teaching him using technology and help his independence).

This is really what these sails days are about.   The breaking down of barriers through the art of sailing has taught me that everybody can achieve what they want to.  It might just take a few bumps in the road to get there but you will eventually.

Being aboard Tenacious, although it was only for one day, reminded me of how grateful I really am for the opportunities that I have been given since sailing on Jubilee Sailing Trusts, Lord Nelson.   I have joined Blind Sailing UK and am working towards hopefully competing for Great Britain.   I am also sailing this summer with Vision of Adventure; my aim for this holiday is to gain my competent crew certificate.  Without my original day sail none of this would have happened and I would never have considered a passage voyage with the JST in the future.

I have included few words from Kevin and Howard on their experience:

‘I was very surprised at the way I found a new sense of freedom aboard this ship, this was only after a few hours, using the stairs independently and moving from deck to deck came easier than I expected it would.  I enjoyed the tour of the engine room and found the engineer to be very knowledgeable.  All crew were very enthusiastic, as well as doing their normal jobs they had to teach about 60 complete novices how to do even the simplest of tasks.  They still made us all laugh and “two six heave” (pulling on ropes to set, move or tidy away sails).  I would definitely try a voyage in the future.’ Kevin

‘The boat is 750 tons with 3 masts and capable of carrying 21 sails. In other words, she is big, so big she had to have a pilot onboard to take us into and out of Harbour. We were lucky with the weather – bright, sunny with some breeze although in the morning the air was cold.  We motored towards the Nab Tower to the East of the Isle of Wight, turned (very slowly) and set some sails. Setting sails was hard work and we all had to haul what seemed miles of rope just to set one sail. In the end 11 were set and we sailed at 3.3 knots back towards Portsmouth.  Before that and before lunch several intrepid ‘guests’ went up the rigging to the first look out platform then down again. Our brilliantly courageous Kate did this and tackled the overhang at the top of the rope ladder to get onto the platform. Brilliantly well done.  We were fed and watered well, looked after extremely well by the crew and by the sponsors for the day.  A massive thank you to both for giving us such a lovely, sometimes relaxing, sometime energetic day in lovely sunshine.  I got home tired and slept well that night.’  Howard 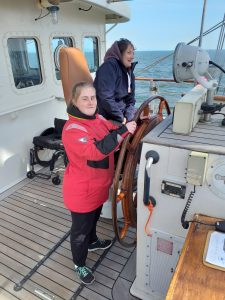 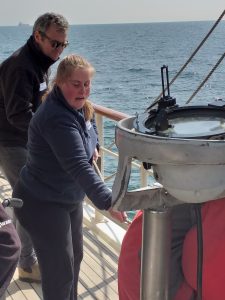 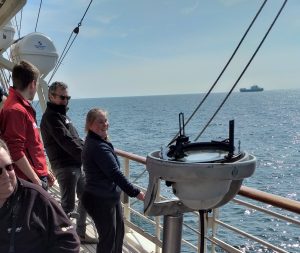 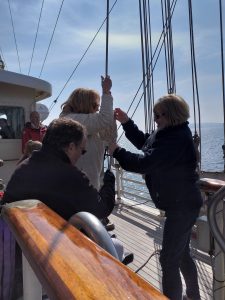 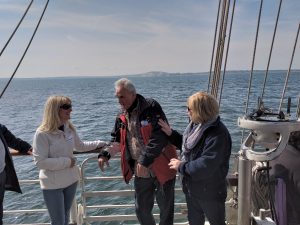 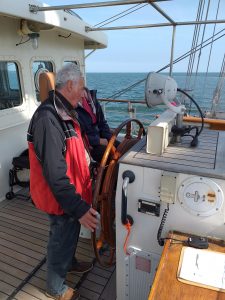 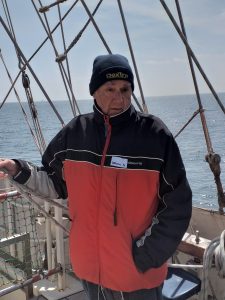 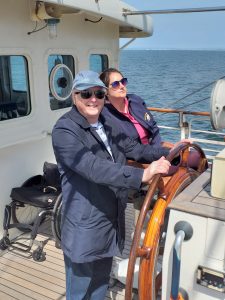 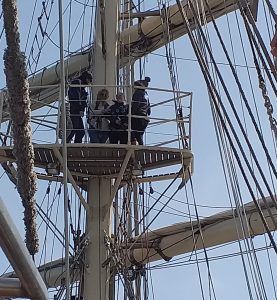 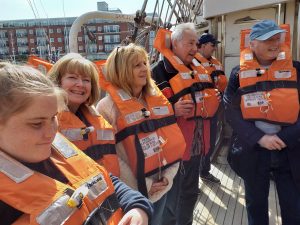 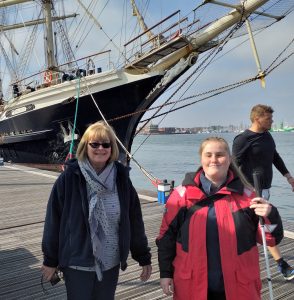 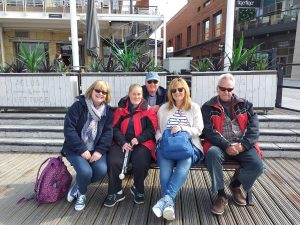 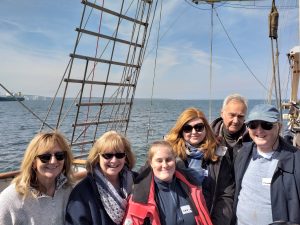