Sailing without sight to Antigua 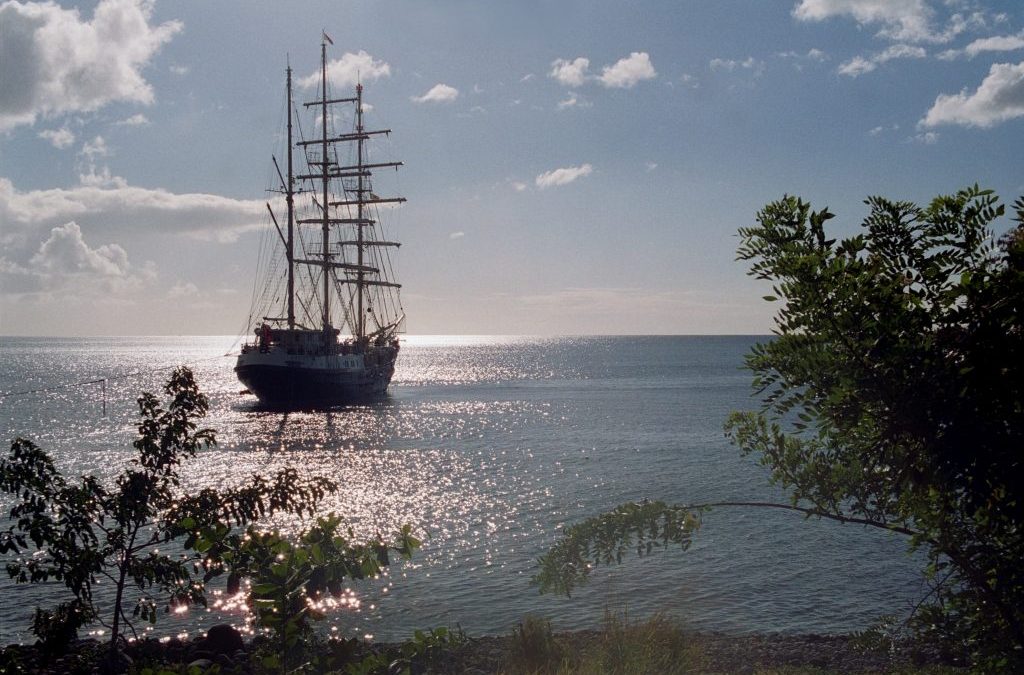 Reflecting on the voyage it feels either like I’m telling someone else’s story or like I’ve dreamt the adventure.

In the beginning, the thought of doing something like this challenge terrified me.  Jackie suggested this voyage to me back in February of last year, I was not cut out for the passage in my eyes, or was I?  Before I knew it, I’d given the trip a lot of thought and with encouragement from family and friends I’d booked the voyage.

Time whizzed passed and soon enough I was traveling to the airport with my partner and mother who were accompanying me to Las Palmas.  Despite a delayed evening arrival, we enjoyed a pizza sitting outside in the warm December air in the Canaries.  Because I am a worrier and hate being late, a few hours before I was due to join Tenacious, we took a stroll to the harbour to find the ship that I was due to spend 32 days aboard.

The first evening on Tenacious was spent getting to know the rest of the ship’s motley crew.   The next day we sailed to Santa Cruz, it took about 24 hours to get there. On New Year’s Eve, my watch went out for a curry, thinking back to that evening, I just remember the many laughs and stories we all shared that night.

If asked I cannot pick one highlight of this trip but spending New Year in Santa Cruz would be amongst the list.  Watching the fireworks standing on the bridge with a glass of champagne was spectacular and the sound of all ships horns in the area sounding at midnight was overwhelming.

Hours later we began our passage across the Atlantic and used the first week or so to get used to the routine of running a ship as a 24-hour operation.  The time soon came for everyone to prove that we were safe to climb the masts, even I was given the same opportunity to climb to the first platform and out on to the yard.  I was fine climbing up to the platform but getting out on to the yard which is a part of the ship that runs horizontally that supports the sail terrified me.  I guess it’s because I had to take a leap of faith from a stable ladder on to a foot rope.  After everyone had returned to the main deck, and I’d done a separate assisted climb I was given permission to climb the mast without the assistance of a member of the permanent crew on the agreement that I went with who I trusted to talk me through what to do.  I have climbed on the JST’s sister ship before but to be given the same privilege as everyone else made me feel very empowered.  I understand that the trust’s ethos is to look at a person’s ability and not their disability, but this small inclusion was yet another way for me to feel just as equal as all other voyage crew.

To pass the time many of the voyage crew gave talks about their work or a special interest, I spoke about my journey in to sailing without sight and used two of the exercises Southampton Sight uses when we deliver sight loss awareness training,  the food challenge and an origami task.  I did this to try and give the others an understanding of what It could be like having a visual impairment.    I also included  my ambition of being part of a blind sailing world championship team in the future.

Once we were firmly into the routine of sailing the ship, many of the 21 days we were at sea ran in to one another.  They were punctuated by special moments like a brilliant sunrise that was accompanied by a playful pod of dolphins, the time I saw the light of the moon because the night sky was so dark I was able to point out where the moon was, the weather got warmer, we knew this, not by the amount of sun cream we liberally slapped on but also by the increasing sightings of shoals of flying fish.  For about 5 or so days although we weren’t in sight of land, we knew we were sailing off the coast of the Sahara.  One morning I was on watch we had the most vivid orange sky and once the sun had risen someone said that what we were seeing was sand from the Sahara.  These and many more experiences will stay with me always.

The first time I stepped out on to the bow sprit with my buddy was yet another special moment, as she was talking me through where to put my hands and feet, we had a different pod of dolphins frolicking in the waves directly below us.  They were so close I could hear their splashes and squeaks of communication with their play mates.  Once I’d almost reached the tip of the bowsprit, I thought I’d be brave and sit on the cargo net; this was all that was between me and the ocean.  In some ways this was magical but quite scary at the same time.  Before we went back to the main part of the ship I laid down and the rocking motion of the boat and the sound of the waves was so tranquil I had to try to not fall asleep.  As much as I wanted to do this I couldn’t because I was soon expected to take my turn at helping in the galley.

Being onboard allowed me to push my boundary’s in ways that I wouldn’t normally be able to, for example, climbing to the top of the foremast with my buddy and helping to complete a harbour stow taught me that even I must not put barriers in front of myself.

When we arrived in the Caribbean, we first visited a small island called Bequia, everyone enjoyed the freedom of being ashore and the rum punch.   The sea was the warmest I’ve ever swam in, even if I did fall off the walkway on the way to the beach from about 4 foot high.

We stayed in Bequia for two nights and our next stop over was Dominica, this island was rustic but charming in its own way.  We anchored in the bay and enjoyed taking part in either a tour of the island or like myself others went on an Indian river Cruise.  The wildlife sightings included iguanas and many more tropical creatures, wildlife was a constant topic of conversation throughout our journey, especially the sightings of sperm whales and tropical birds.

Before we started the final sail to Antigua, we had the opportunity to swim in Portsmouth bay which was where we had anchored overnight.  The water was so warm, and everyone enjoyed jumping in from the side of the ship, even me.  I entered the water by climbing down a ladder the first time but eventually plucked up the courage to take my turn at jumping in.  Only afterwards did I find out that I’d jumped from the platform that was 2 metres high, it was so scary, but I am pleased I pushed aside the fear and did it, as I did everyone cheered and celebrated my small victory.

As we tied up in Antigua, I felt emotional because although I wanted to see my family, I just didn’t want the experience to be over.  This adventure has inspired me to take on another passage voyage and I celebrated the collective group and individual achievement by drinking a cold beer sitting at a cafe with two watch leaders.

If I could say one thing to anybody it would be to always take the leap of faith and try something because if you don’t you may never know if you will like it, barriers are there to be removed and challenge you to reach your full potential in any way you can.